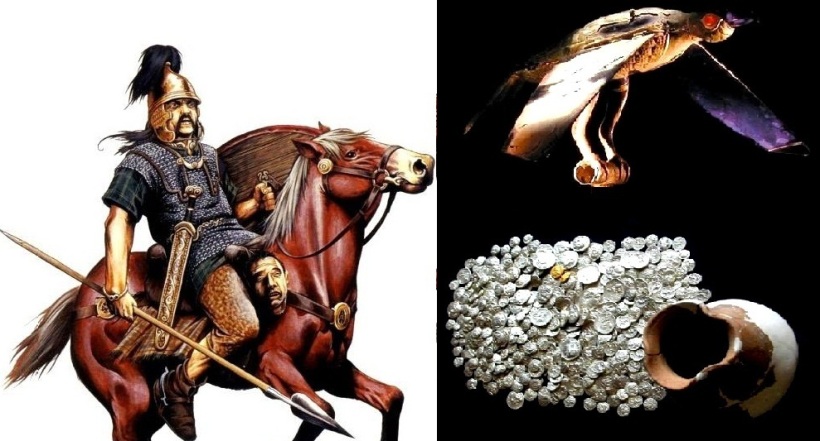 .
Until recently our knowledge of the events surrounding the Celtic migration into southeastern Europe at the beginning of the 3rd century BC has relied exclusively on Greek and Roman ‘histories’, with little or no reference to modern archaeological evidence which supplements and, in many cases, contradicts these accounts. However, over the past decades a wealth of new archaeological data from the region concerned finally allows us to furnish a more accurate picture of events surrounding this dramatic episode in European history…
. 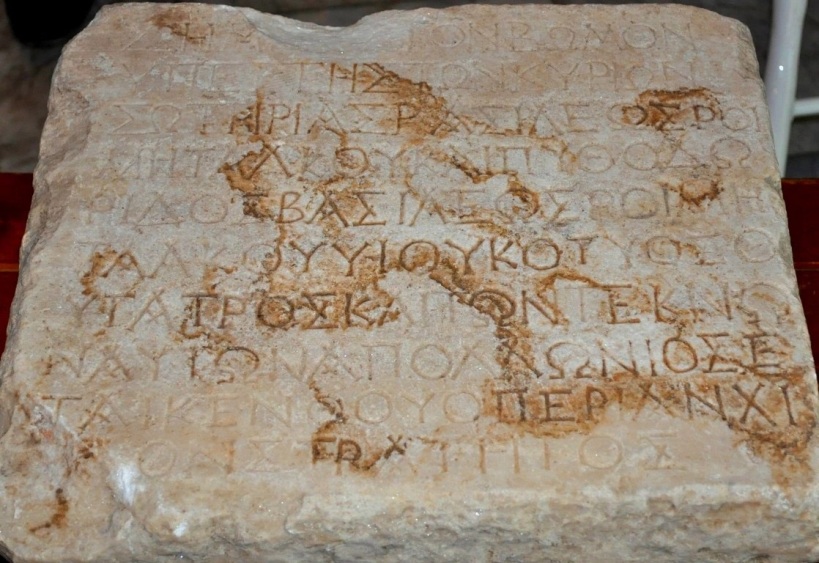 One of the forgotten political dynasties of Roman history is the so-called Sapaioi dynasty, installed by Rome as ‘Kings of Thrace’ in an attempt to legitimize her rule in the region. Following the Roman conquest, which culminated in the campaigns of 29/28 BC  by  M. Crassus against the Bastarnae and the Scordisci tribes (Dio Cass. 51. 26-27), a Thracian puppet government, drawn from members of the Odrysae tribe, who had collaborated with Rome (loc cit), was installed to preside over the Romanization of Thrace. This Thraco-Macedonian tribe had ruled large parts of Thrace until the arrival of the Celts in the 4th/3rd c. BC, and after the Roman conquest of Thrace at the end of the 1st c. BC, members of this dynasty were chosen by Rome to rule Thrace (under Roman patronage) until direct imperial rule was finally established in 46 AD. 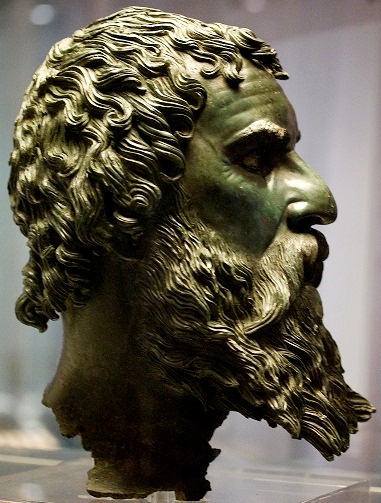 Bronze head discovered near the entrance of the Golyama Kosmatka Tumulus near Seuthopolis in the “Valley of the Thracian Kings”, part of a life-size statue thought to be of the Thraco-Macedonian King Seuthes III. (late 4th c. BC)

From the very beginning it was clear that these Odrysae ‘kings’ had no popular support, and were despised by the population of Thrace as traitors. The first of these, of whom we have extensive numismatic exidence, is Rhoemetalces (Ῥοιμητάλκης) I,  who came to the throne in 12 BC. Rhoemetalces was a loyal ally of the Roman emperor Augustus, and had initially been the guardian of King Rhescuporis I (his nephew).

In 13 BC the local population, led by a priest-chieftain, Vologaeses of the Bessi tribe, had rebelled against this new Roman backed dynasty. The young Rhescuporis was executed by the rebels, and the new king Rhoemetalces I’s reign began rather shamefully when his Thracian army deserted to the rebels, forcing him to flee Thrace – ‘He (Vologaeses) conquered and killed Rhascyporis, the son of Cotys, and afterwards, thanks to his reputation for supernatural power, he stripped Rhoemetalces, the victim’s uncle, of his forces without a battle and compelled him to take flight. In pursuit of him he invaded the Chersonese, where he wrought great havoc’ (Tacitus 2, 64).

Rhoemetalces I was finally restored to his throne when a Roman army led by the governor of Pamphylia, Lucius Piso, arrived and brutally put down the rebellion (loc cit).

Rhoemetalces I ruled Thrace until his death in 12 AD. Augustus then divided his realm into two separate kingdoms, one half for his son Cotys to rule, and the other half for Rhoemetalces’ remaining brother Rhescuporis II. Tacitus states that Cotys received the cultivated parts, most of the towns and cities of Thrace, while Rhescuporis received the wild and savage portion:

‘That entire country had been in the possession of Rhoemetalces, after whose death Augustus assigned half to the king’s brother Rhescuporis, half to his son Cotys. In this division the cultivated lands, the towns, and what bordered on Greek territories, fell to Cotys; the wild and barbarous portion, with enemies on its frontier, to Rhescuporis ’ (Tacitus, Annals 2:64).

Rhescuporis was apparently unsatisfied with his part of this deal, and set out to annex Cotys’ territory. Inviting his nephew to a banquet to falsely ratify a treaty between them, he arrested and imprisoned Cotys, seizing his part of the kingdom. Cotys died while incarcerated in 18 AD, allegedly by suicide. His wife, Tryphaena, and their children subsequently fled Thrace to Cyzicus to escape Rhescuporis.

After the murder of Cotys by his uncle, the Roman Emperor Tiberius opened an investigation into Cotys’ death, putting Rhescuporis on trial in the Roman Senate. He invited Cotys’ widow Tryphaena to testify at the trial, during which she accused the defendant of murdering her husband. Rhescuporis was found guilty, and Tiberius sent him to Alexandria. However, en route, Rhescuporis ‘tried to escape’ and was killed by the Romans:

“Rhescuporis was removed to Alexandria, and there attempting or falsely charged with attempting escape, was put to death” (Tac. Ann. Book 2:67).

His son, who would later rule Thrace as Rhoemetalces III (see below), was spared by Tiberius and allowed to return to Thrace. In the meantime Tiberius returned the whole Thracian Kingdom to Tryphaena and appointed Rhoemetalces II, her eldest child with Cotys, as co-ruler.

Rhoemetalces II proved to be as unpopular as his predecessors had been. Shortly after he took power, he was besieged in his capital at Philipopolis (Plovdiv) by the local population, intent on executing him as a traitor, and had to be rescued by a Roman legion who arrived at the last minute and massacred the ‘rebels’. As mentioned, the Thracian king is referred to by the Romans as ‘a loyal friend and ally’, and took part in the Roman campaign of 26 AD led by Sabinus against the Celtic Artacoi tribe in the Haemus (Balkan) mountains. Rhoemetalces proved himself an inept military leader, and after leading a campaign of murder and destruction against the local population, his Thracian forces were massacred during a surprise attack by the barbarians. 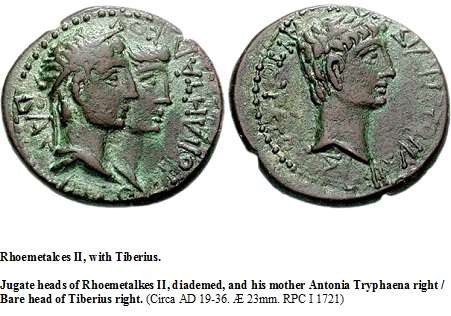 LAST OF THE PUPPETS

Upon Rhoemetalces II’s death in 38 AD, Rhoemetalces III (the son of Rhescuporis II, who had been murdered by the Romans), ruled in association with his cousin-wife Pythodoris II. However, the last ‘Thracian king’ shared the fate of many of his predecessors, and was himself murdered in 46 AD. It is unclear whether he died at the hands of insurgents, or on the orders of his wife. After his death, another major uprising by the local population was brutally put down by the Romans, and Thrace subsequently became a province of the empire.

Inscription mentioning the last 3 Roman client/puppet kings of Thrace – discovered on June 9, 2015 at  Aquae Calidae (Thermopolis Archaeological Reserve/Burgas), Bulgaria. The inscription dates to between 26 AD and 37 AD, and the (provisional) translation reads:

On the Odrysae see also:

The Valley of the Thracian Kings is an area of south-central Bulgaria situated to the west of the ancient Hellenistic polis of Seuthopolis / Σευθόπολις (near modern day Kazanlak), on the southern slopes of the Haemus (Balkan) mountains. Over the past decades this area has become one of the most popular tourist destinations in Bulgaria, with thousands of visitors from all over the world coming to see such cultural treasures as the UNESCO listed Kazanlak tomb and other sites in the area. According to Bulgarian archaeologists, this remarkable archaeological complex was established by the Thracian priest-king Seuthes III at the end of the 4th c. BC, and was the capital of the ‘Great Odrysae state’ and its ruling elite – the immortal bearers of the esoteric faith-doctrine of orphism, until the Roman period (Fol et al, Ancient Thrace 2000:120-121).

However, behind the fairy tales and golden masks lies another reality, a reality which, for reasons best known to Bulgarian archaeologists, is conspicuously absent from their glossy tourist brochures and history books…