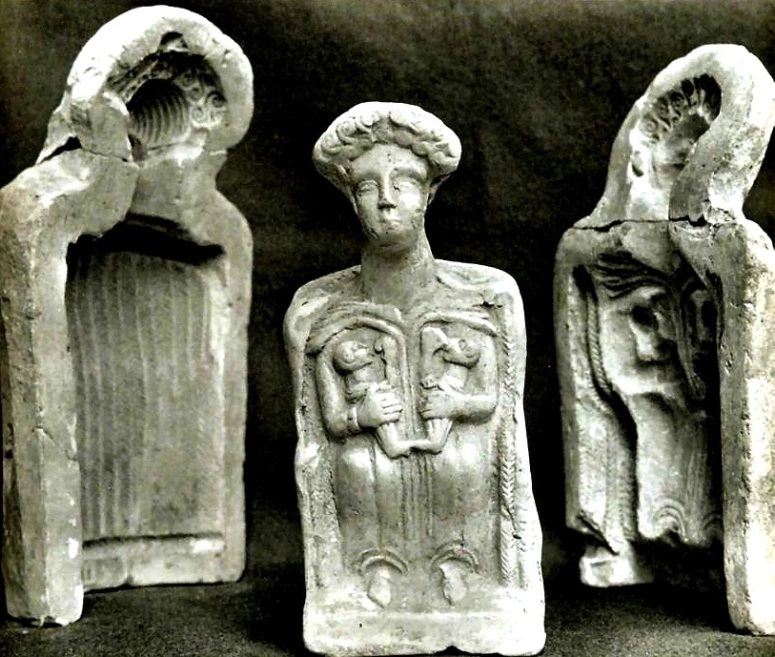 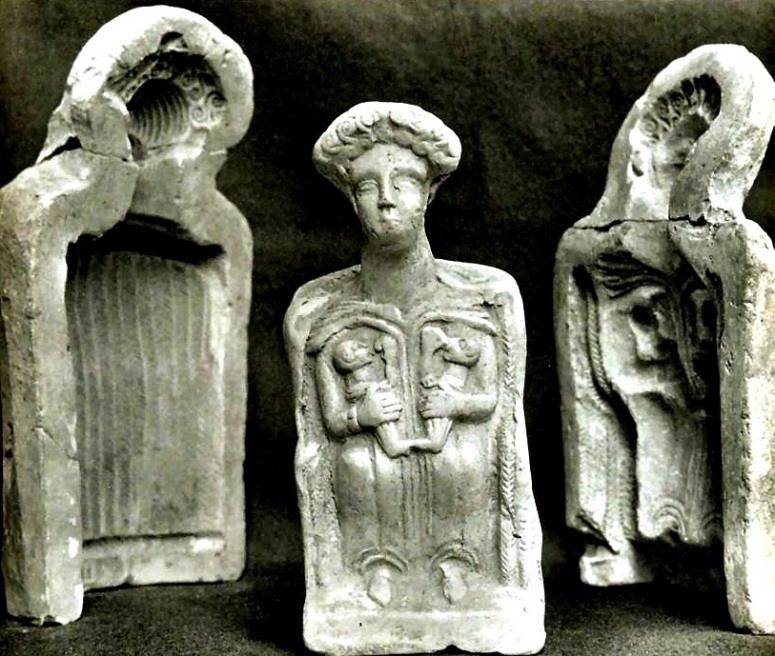 In a world where the average woman was not expected to live beyond her 20’s, and death in childbirth was common, it is little wonder that one of the most widespread cults in the Celtic (and Romano-Celtic) world was that of the Nutrices – the protectors of maternity and motherhood.

In Britannia and Gaul the Nutrices/Matres are often represented in a triad on votive reliefs such as those from Circencester (Gloucestershire) where the central Goddess is holding the baby in her arms, or Vertault (Côte d’Or) where 3 nursing Goddesses are depicted. 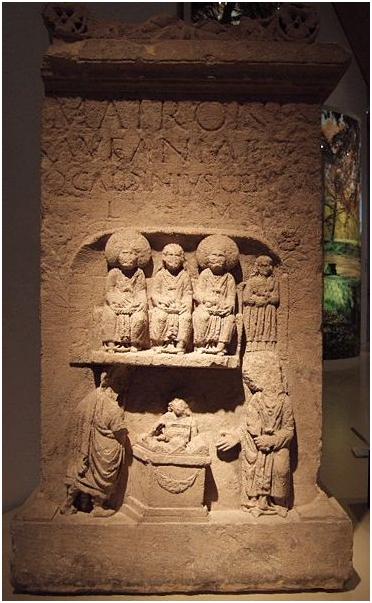 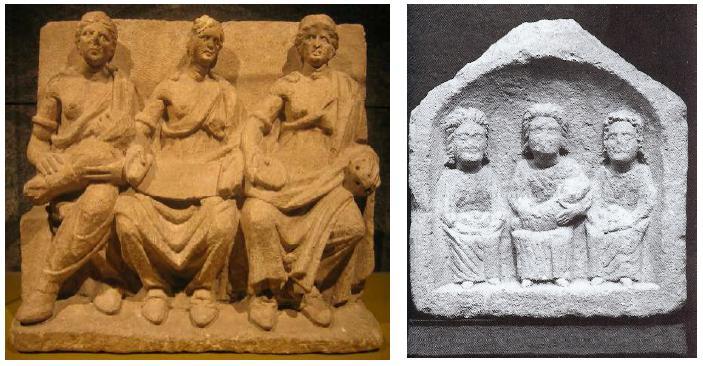 Above Left: Terracotta relief of the Matres from the Gallo-Roman settlement of Vertillum (Vertault, Côte d’Or). 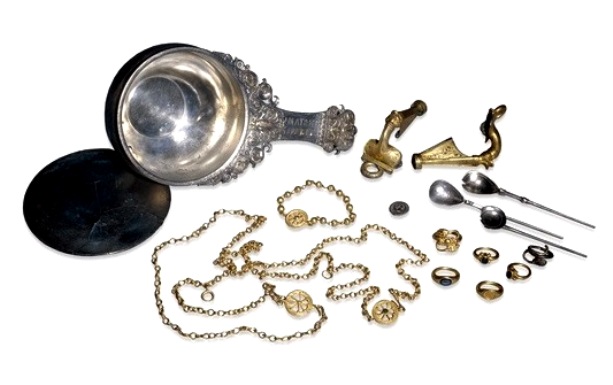 Hoard of silver jewelry from Backworth (Tyne & Wear), England ( 1-2 c. AD). The silver pan, which was probably the container for most of the objects, has a  decorated handle with a gold-inlaid inscription in Latin MATR.FAB DVBIT – a gift from Fabius Dubitatus to the Celtic Matres 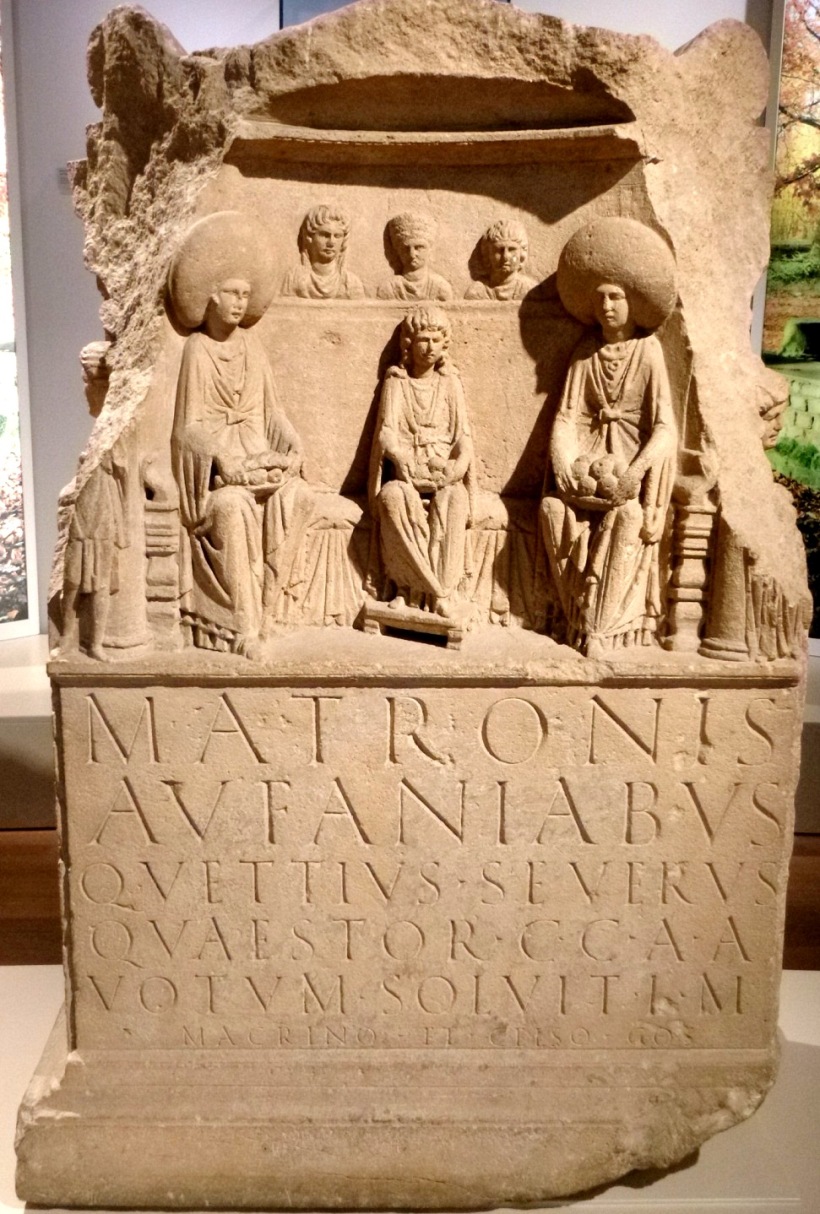 Other depictions of the Nutrices are found on white terracotta figurines discovered across Europe, depicting seated Matres wearing a diadem and long garments, feeding 1 or 2 infants at their breast. The Celtic Nutrices should also be related to the Roman Dea Nutrix, who was venerated especially in North Africa, either alone, or together with Saturnus, and is also represented breast-feeding babies, or as protector of children. 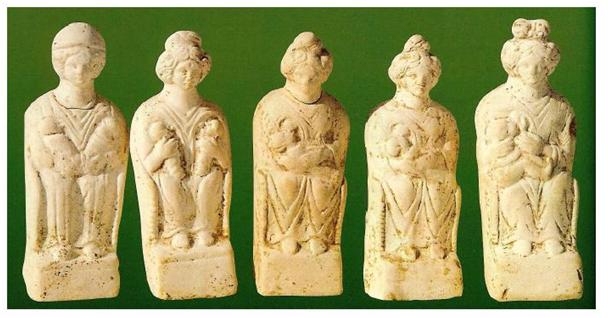 Five statuettes in white terracotta of nursing Matres discovered in a well in Auxerre (Yonne). 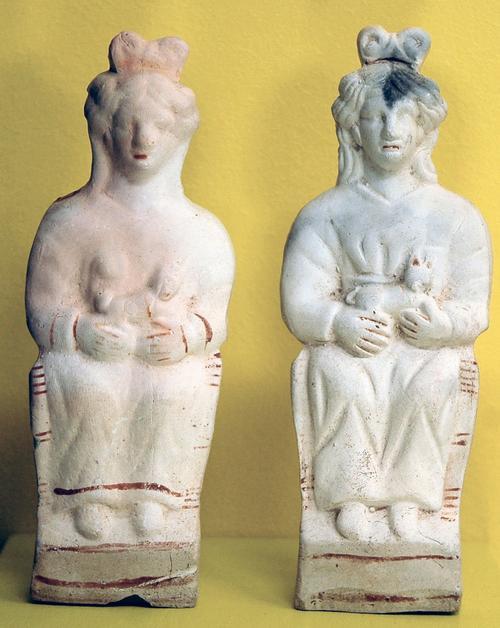 Statuettes of the Matres from Morlanwelz (Hainaut), Belgium

Mould for the production of statuettes of the Matres from Toulon-sur-Allier (Auvergne), France

On the Balkans, the largest center dedicated to the Nutrices was that at Poetovio in Pannonia (Ptuj, eastern Slovenia), where 2 sanctuaries and numerous inscriptions have been discovered. In Poetovio the Nutrices are always venerated in the plural form and, as in the case of sites such as Cirencester (Britannia) and Vertault (Gaul), are often portrayed as a triad.

Noteworthy is the fact that, although dating to the Roman period, a significant number of dedicators to the Nutrices/Matres at Poetovio and other such sites still bear Celtic names (Šašel Kos 1999). This fact, and the use of a separate Celtic alphabet/script in this region as late as the 3rd c. AD, indicates a remarkable continuity of native religious and cultural tradition throughout the Roman period. 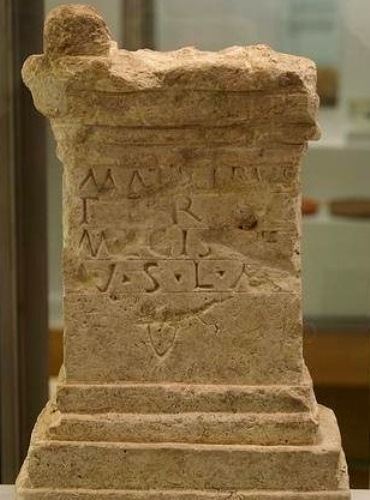 TO THE 3 ALMIGHTY MOTHERS 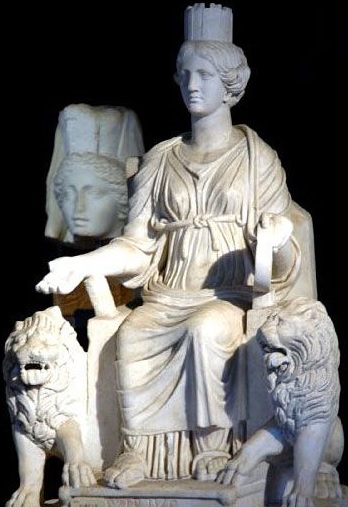 One of the most powerful and beautiful women of her day, the life of the Gallo-Greek Princess Camma is an extraordinary tale of obsessive love, murder and ultimate justice.

Born a princess of the Celtic Tolistoboii tribe in Galatia (today’s central Turkey), Camma was renowned ‘for her form and beauty, but even more admired for her virtues. She was also quick-witted and high-minded, and unusually dear to her inferiors by reason of her kindness and benevolence’ (Plutarch, On The Bravery of Woman. XX Camma*). These attributes appear to have been accompanied by good fortune, for the princess fell in love with, and married, one of the most powerful men in Galatia – a tetrarch called Sinatus. In addition, she was elevated to High Priestess of the Mother Goddess (Cybele-Artemis) at Pessinus – the highest position that could be attained by a woman at that time. It appeared that Camma was truly blessed by the Gods.

However, in true Celtic fashion, what began as a fairy tale soon descended into nightmare. 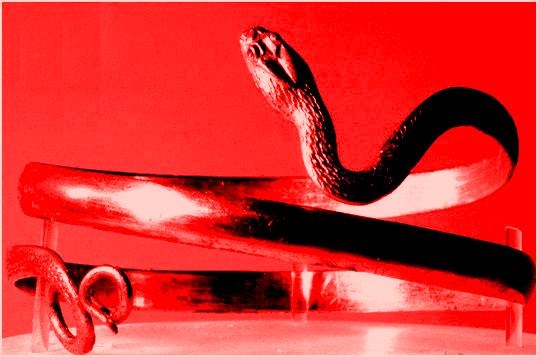 From afar, the priestess was being observed by her husband’s cousin, another chieftain called Sinorix, whose obsession with her grew until it left the bounds of reason. Seeing Camma’s husband as the obstacle to his desire, Sinorix secretly formulated a plan which culminated in the brutal murder of his rival.

With her husband now disposed of, Sinorix lost no time in consoling the widow and, while wooing her, exerting influence on her family to facilitate a marriage between them. As time passed, it seemed that Sinorix’ sinister strategy had borne fruit for, under intense pressure from her relatives, Camma finally agreed to the union. A marriage, to be held in the temple of the Mother Goddess, was hastily arranged. 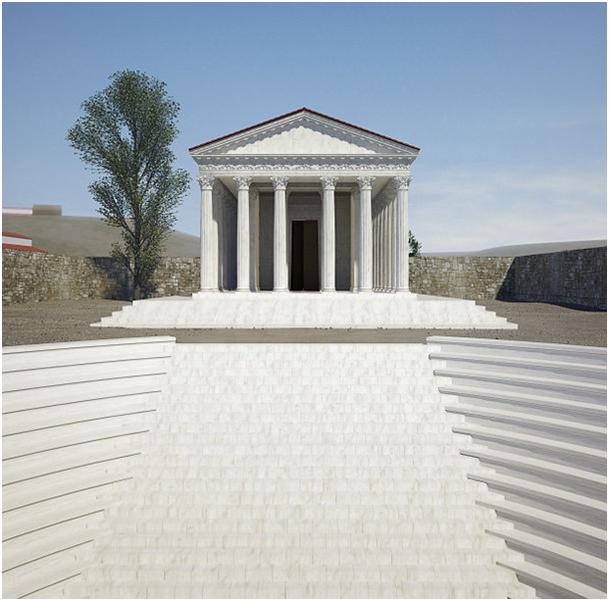 The temple at Pessinus (3D reconstruction)

The ceremony was a lavish affair, as befitted two of the highest ranking members of Galatian society, and a union that would cement the political bonds between the clans of Camma and Sinorix. As the celebrations progressed before the sacred alter of Artemis, Camma filled a golden chalice with milk and honey, a traditional drink on such occasions. Drinking deeply and smiling, the priestess passed the chalice to Sinorix, who enthusiastically drained the goblet.

And then, as he watched his new bride collapse on the temple floor, the look on the chieftain’s face turned first to confusion and then to horror. Convulsions began to wrack his body, and through his agony he heard his wife’s cry of joy:

‘I call you to witness, Goddess most revered, that for the sake of this day I have lived on after the murder of Sinatus, and during all that time I have derived no comfort from life save only the hope of justice’.

Turning to Sinorix, she added, ‘As for you, wickedest of all men, let your relatives make ready a tomb instead of a bridal chamber’. 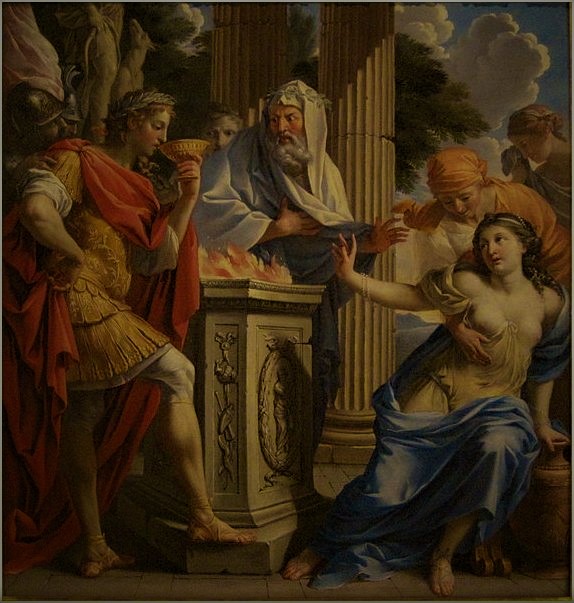 The poison was slow working, bringing unbearable pain. Through the night Camma suffered, yet held grimly to life until, with dawns light, came word that Sinorix had died in agony. Thereupon the priestess, smiling, followed him into the afterlife…

*The life of Camma is also recorded by Plutarch in Moralia (768 b), and Polyaenus (Strategemata, viii. 39) 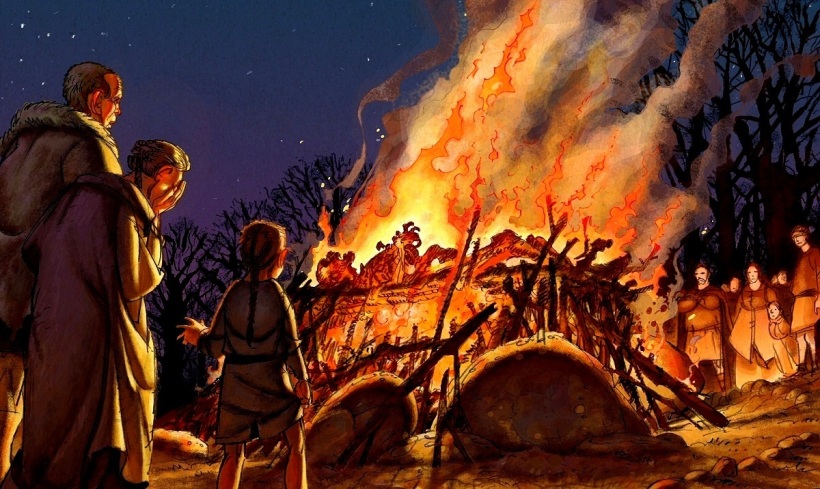 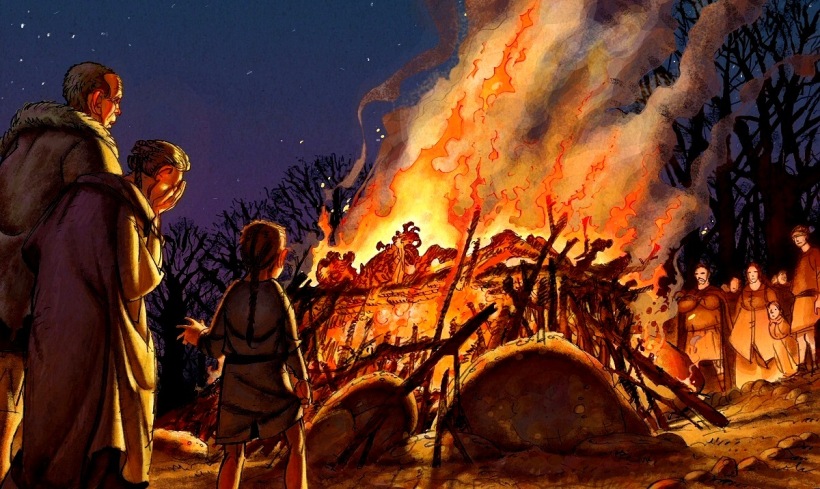 The Mahasati (the great Sati) or the Sahagamana (joint departure) system of cremating a woman alive on the death of her husband is an ancient custom in India, and Sati appears in both Hindi and Sanskrit texts, where it is synonymous with ‘good wife’, the term suttee being commonly used later by Anglo-Indian writers… 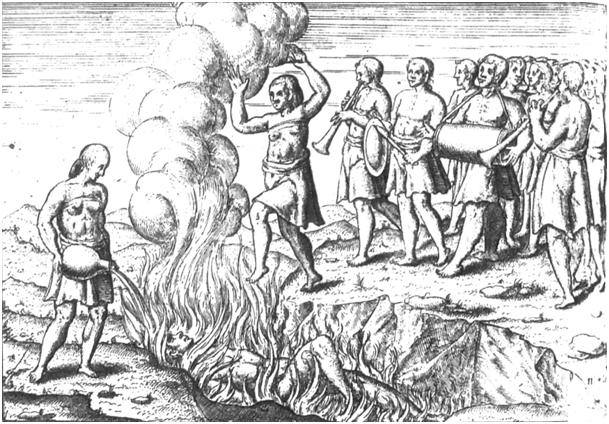 A number of rather strange archaeological discoveries from s.e. Europe over the past few years have thrown new light on the social and cultural relationships between the various ‘barbarian’ peoples who inhabited this region in the pre-Roman period.

One example of this phenomenon was discovered at the late Iron Age burial complex at Remetea Mare in the Banat region of western Romania, which evolved from the period over LT B2 and the start of LT C1 (i.e. from circa 280 BC to the end of the 3rd c. BC). In terms of funerary rites and rituals, the cemetery at Remetea  Mare illustrates the cultural mixture specific to Celtic cemeteries in the east and south of the Carpathian Basin (fig. 1)  – with one notable exception.

Burial # 3 at the site, which dates to the same period, is a female inhumation burial which contained a handmade bowl, a small bi-conical wheel-made vessel, iron tweezers that when discovered still preserved attached fabric pieces of the woman’s clothing, a segment of an astragal belt reused as pendant, and a bronze Thracian brooch (Rustoiu 2011, 2012) (Fig. 2). The ‘Thracian’ brooch belongs to the IIb variant according to Zirra’s typology and was dated in the first half of the 3rd century BC (Zirra V. (1998) Bemerkungen zu den thraco-getischen Fibeln, Dacia N. S., 40–42, 1996–1998, 29–53).

Both the funerary rite (inhumation rather than cremation – unique at the cemetery) and inventory illustrate that the woman came from a community markedly different from the one in which she died, in this case probably from a Thracian group (Triballi?) south of the Danube, and reached the Celtic community at Remetea Mare following a matrimonial alliance established between the Celts and the Thracians, sometime in the first half of the 3rd century BC. 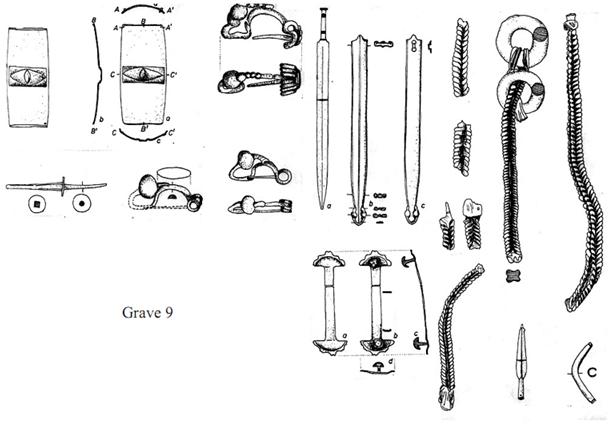 (after  Rustoiu 2011- Rustoiu A. (2011) The Celts from Transylvania and the eastern Banat and their Southern Neighbours. Cultural Exchanges and Individual Mobility. In: The Eastern Celts. The Communities between the Alps and the Black Sea.  Koper–Beograd 2011. p. 163-171) 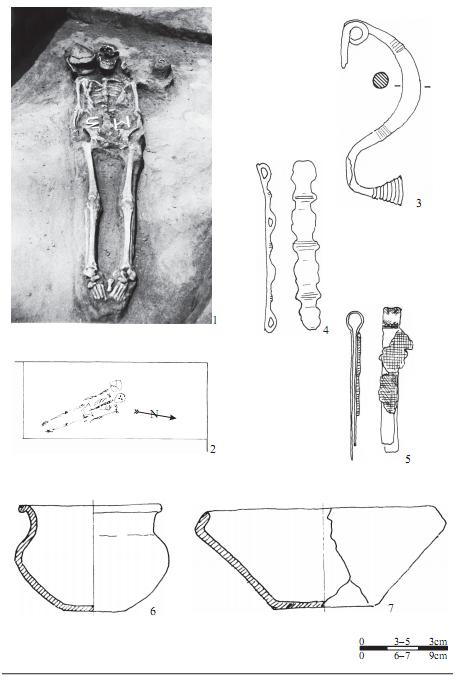 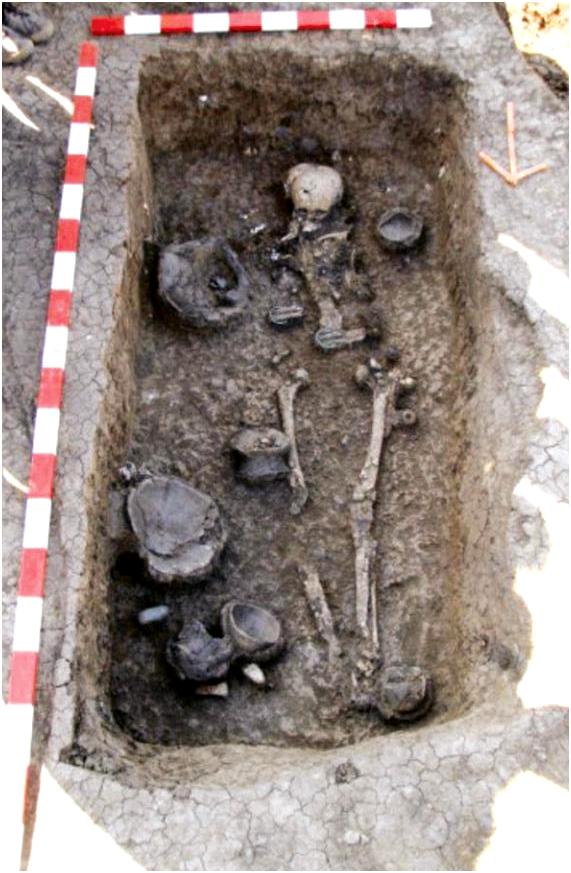 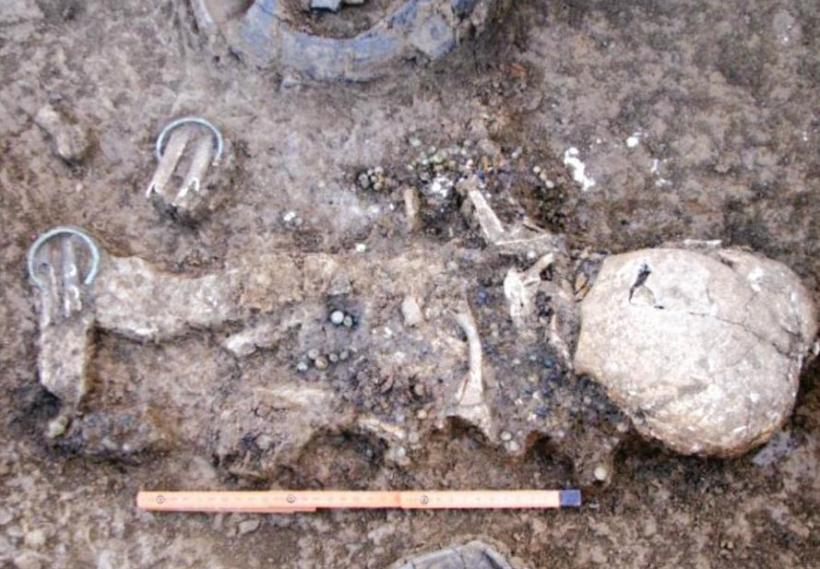 Burial of an Illyrian woman in the Celtic cemetery at Aradu Nou (Banat) in western Romania (late 4th/early 3rd c. BC).

Dating to the initial phase of Celtic expansion into this area, her interment in a Celtic cemetery again indicates a matrimonial alliance contributing to the cementing of inter-cultural relations during this period. Such alliances also logically contributed to the creation of complex social networks between the elites of different communities.

(after Rustoiu A., Ursuţiu A. (2013) Indigenous and Celtic Garment Assemblages in Banat and the Surrounding Areas at the Beginning of the La Tène Period (Observations Regarding the Silver Spiral Earrings). In: Archaeological Small Finds And Their Significance. Proceedings of the Symposion:
costume as an identity expression – Cluj-Napoca 2013. p. 77-88)

Another example of such matrimonial alliances between the indigenous Balkan tribes and the Celts comes from a cremation grave, discovered by chance in 1977 at Teleşti in the Oltenia region of Romania. Its inventory consisted of a fragmentary bronze belt, two fragmentary bronze brooches (probably a pair; one destroyed on the pyre), four glass beads and fragments of a blue glass bracelet, an iron horse-bit and two iron elements which probably belonged to a ceremonial cart. The entire assemblage is characteristic for the Celtic environment dating from the Lt C1 phase (second half of the 3rd century and the beginning of the 2nd century BC).

The funerary inventory from Teleşti represents the burial of a Celtic woman in a Thracian context. As is the case at Remetea Mare, this burial also points to the existence of an inter-ethnic matrimonial alliance. Her belt, as well as other garment accessories, suggests that the deceased came from a Celtic area, probably in Transylvania or Scordisci territory in Serbia/Bulgaria (Rustoiu A. (2012) The Celts and Indigenous Populations from the Southern Carpathian Basin. Intercommunity Communication Strategies. In: Iron Age Rites and Rituals in the Carpathian Basin. Proceedings of the International Colloquim from Târgu Mureș 7–9 October 2011. Târgu Mureș 2012).

An example of such matrimonial alliances is also recorded at the beginning of the 2nd c. BC. In this case the Macedonian king Philip V, in order to secure a military alliance with the Celto-Scythian Bastarnae tribes, arranged for his son to be married to a Bastarnae princess:

“The envoys whom he had sent to the Bastarnae to summon assistance had returned and brought back with them some young nobles, amongst them some of royal blood. One of these promised to give his sister in marriage to Philip’s son, and the king was quite elated at the prospect of an alliance with that nation” (Livy 40:5; see also ‘Bastarnae’ article). 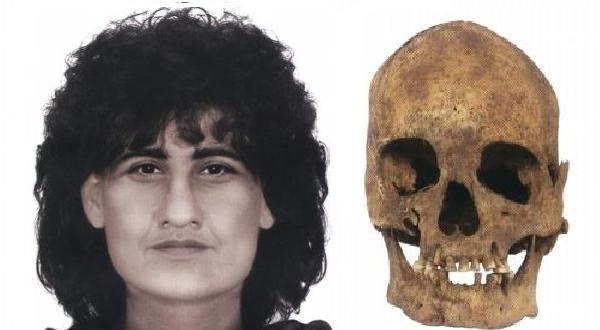 Skull and facial reconstruction of a Celto-Scythian (Bastarnae) woman found in the Celtic burial complex at Pelczyska, Poland (1st c. BC)

Well recorded in the Hellenistic world, the aforementioned burials from Romania and Poland represent the first direct archaeological testimony that such matrimonial alliances were also common among the ‘barbarian’ peoples of Europe. Such marriages would logically have had both a social and political significance.

It is worth noting that these women, although living in an alien cultural environment, retained their own cultural identity, and upon their deaths their respective customs and burial rites were respected by their host tribe. Such inter-ethnic marriages undoubtedly acted as a catalyst for the development of the symbiotic relationship which evolved between the local tribes and the Celts, resulting in close social, cultural, and political ties. This phenomenon is to be observed in the material culture, and manifests itself in the development of the mixed Celto-Thracian Zaravetz Culture in n.e. Thrace, and military alliances formed between them against Rome during the Scordisci Wars of the late 2nd/1st c. BC.