Probably the most significant Celtic burial yet published from the territory of today’s Bulgaria is that of a Scordisci cavalry officer discovered in the Montana area in the north-west of the country. Dating to the La Têne C2/D1 period (late 2nd / early 1st c. BC)… 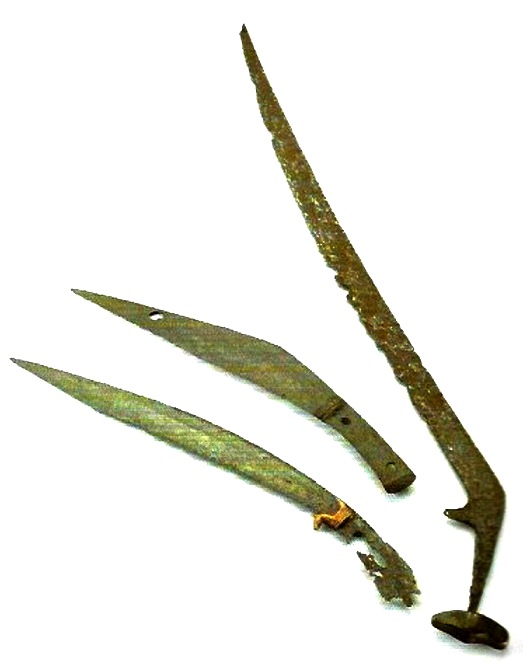 The use of curved single-edged swords – μαχαιρα/machaira* (and variants thereof) – developed during the Bronze Age in south-eastern Europe, with both the Iapodic and Liburian groups on the eastern Adriatic coast using variants of the machaira during this period (Batović 1983:314; Dreschler-Bižić 1983:383-384). Machaira type swords also appear… 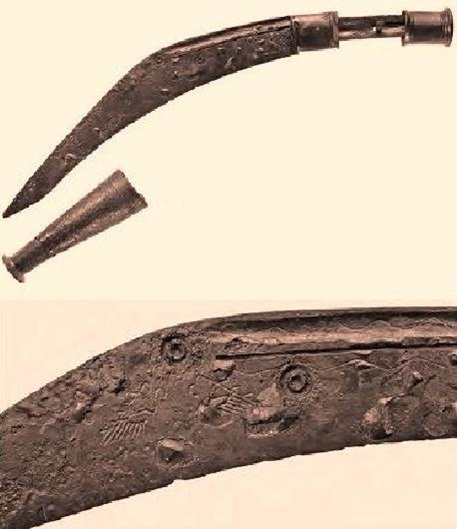 A small selection of Celtic warrior burials from Eastern Europe (5 – 1 century BC). This post will be updated periodically, as further discoveries/publications come to light. 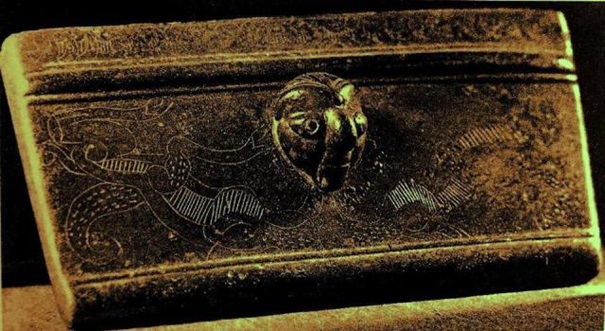 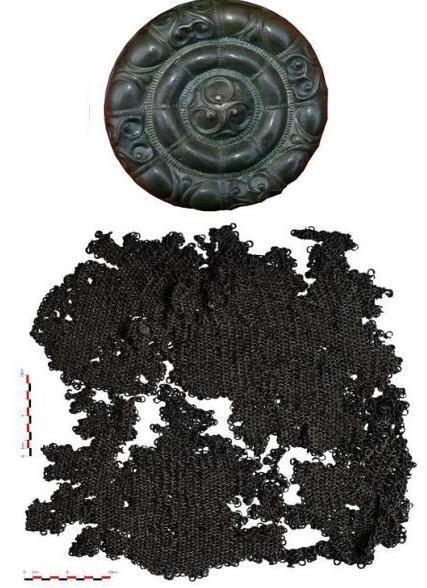 The area of the modern city of Ptuj (ancient Poetovio) in eastern Slovenia has yielded a massive amount of material pertaining to the Celtic culture, uncovered at multiple sites around the city. While the majority of this archaeological material has hitherto tended to relate to the immediate pre-Roman and Roman periods, recent discoveries have also furnished fascinating information regarding the earlier phases of Celtic settlement in this part of Europe. 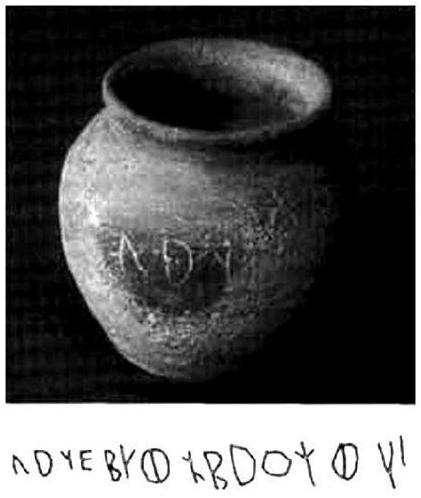 The Brogdos Pot from Poetovio
The most extraordinary Celtic inscription to be found at Poetovio is undoubtedly that found on a beaker at the site. Dated to the 2nd/3rd c. AD, and written in a Celto-Etruscan script, this inscription reads ARTEBUDZ BROGDUI which has been translated as ‘Artebudz for Brogdos’. Both names are Celtic, and the vessel was a votive offering to Brogdos – a deity guarding the border between the world of the living and the after-world.

In 2007 four Early La Tène (LT B2) graves were discovered in Srednica on the outskirts of Ptuj, three female burials and that of a warrior. The most interesting of these burials (#9) was that of the Celtic warrior, dating to the late 4th/ early 3rd c. BC, which was accompanied by ceramic vessels, a Middle La Téne iron fibula, socketed spearhead, knife and a Hatvan-Boldog/Münsingen type sword. 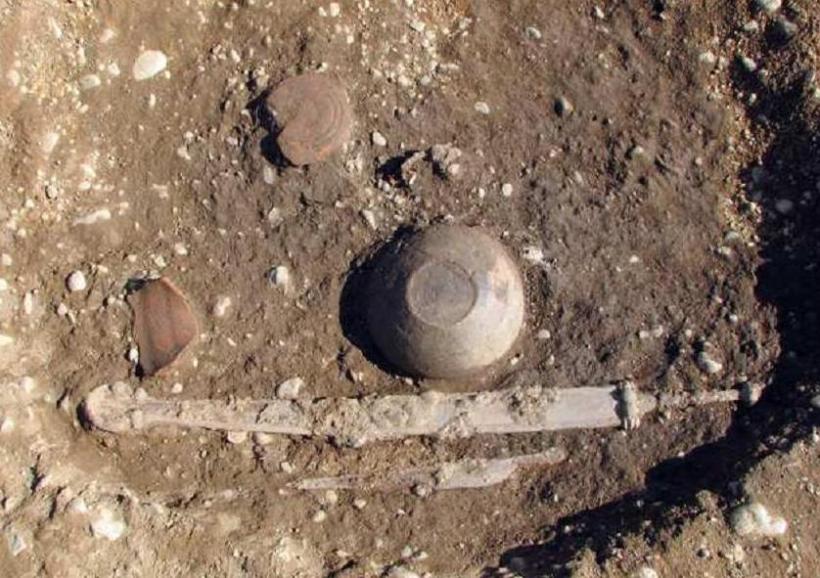 Spearhead, knife and fibula from burial #9

The most spectacular discovery in the burial is undoubtedly the sword/scabbard, richly decorated with tendrils, s-scrolls and triskele motifs, combining many Celtic stylistic elements of this period.

Upper plate of the Srednica scabbard

Suspension loop of the Srednica scabbard

From a wider perspective, the Srednica burials represent the first phase of Celtic migration into this part of Europe. In the initial phase only a few inhumation burials are known, such as burials 63 and 111 at Karaburma /Belgrade from Scordisci territory, to which we may add one of the female burials from Srednica, indicating that by the late 4th century BC eastern Slovenia was already settled by Celtic populations (Lubšina Tušek, Kavur 2009). While it has traditionally been thought that the initial Celtic settlement in the Central Balkans was connected with the ‘Brennos Invasion’ of 280/279 BC, it is becoming increasingly clear that this campaign was only the culmination of an ongoing migration which had begun decades earlier. 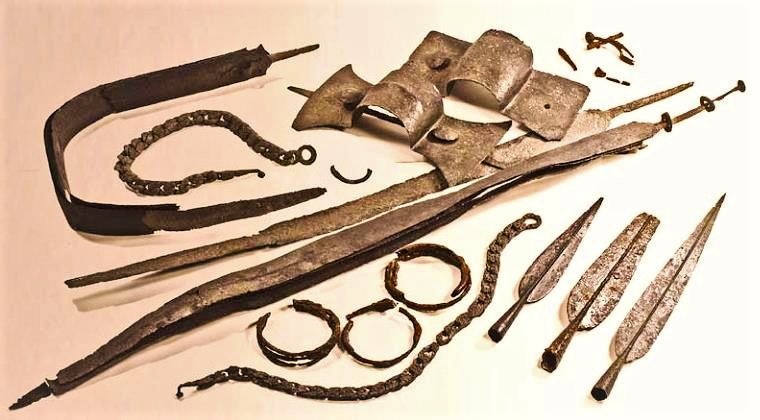 The village of Szabadi (Somogy county) is situated on the Kapos river in southern Hungary, circa 2.5 km. from the Iron Age oppidum at Szalacska. South of the village a Celtic burial site, used from the end of the 4th – early 2nd c. BC, yielded 12 cremation burials including 3 female graves and 5 warrior burials (# 1,4,5,11 and 12). 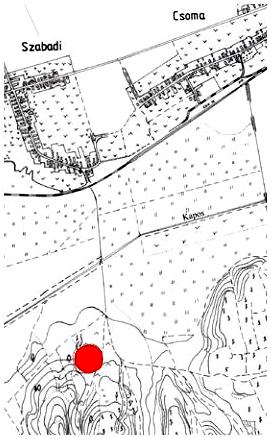 Location of the site

During rescue excavations at the site in 1981 a wealth of archaeological material was uncovered, including ceramic, bronze and iron fibulae, decorated iron, bronze and glass bracelets, ankle rings and weaponry. The most significant find at the site came from grave # 11, where a double warrior burial dating to the late 3rd/early 2nd c. BC was discovered. Material from the burial included 3 swords in their sheaths, 3 spearheads, 2 sword belts, 2 shield umbos, bracelets (iron and glass), and fibulae (Horváth, Németh 2011). 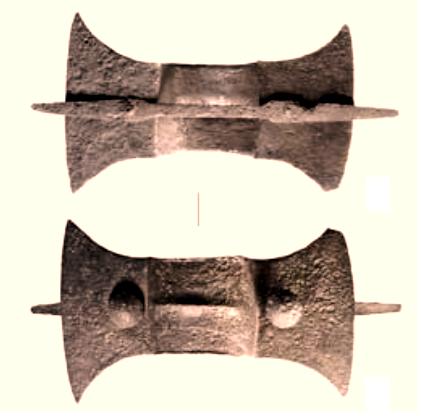 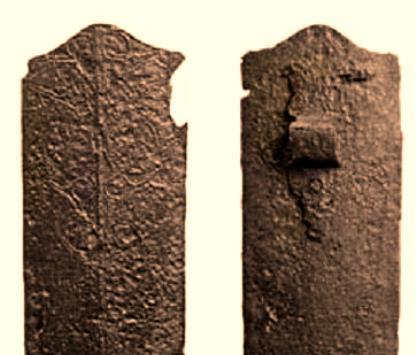 One of the decorated scabbards from burial #11. Although badly corroded, at the opening of the sheath a simple symmetrical carved decoration can be observed, composed of tendrils and two drops, known as the Hungarian Sword Style (phase 2, after Szabó, Petres 1992; illustration after Horváth, Németh 2011)

In the south-west and south-eastern parts of the grave meat (chicken and pork) for the afterlife had been placed in bowls. A further notable find in the warrior burial was a small glass bracelet, much smaller than the iron bracelets of the warriors. Such glass bracelets are characteristic for Celtic female burials of this period; a significant marker of Celtic eastwards expansion, they have been found in 3rd c. BC contexts as far east as Celtic sites such as Arkovna, Kalnovo, Sevtopolis and Zaravetz in e. Bulgaria. It is believed that the bracelet in burial #11 at Szabadi was a present to one of the warriors from his girlfriend or wife, which he also carried with him into the afterlife (loc cit).

The double burials in grave #11 at Szabadi were performed at the same time, and it has thus been assumed that the warriors fell in battle (Horváth, Németh 2011). Although the nature of the cremation process makes forensic confirmation impossible, this indeed appears the most plausible explanation for such a phenomenon. Finally, it is noteworthy that similar burial assemblages to those at Szabadi are common in the territory of the Scordisci (loc cit), logically indicating a close relationship between the Celts of the Kapos Valley and those in Serbia and n. Bulgaria. 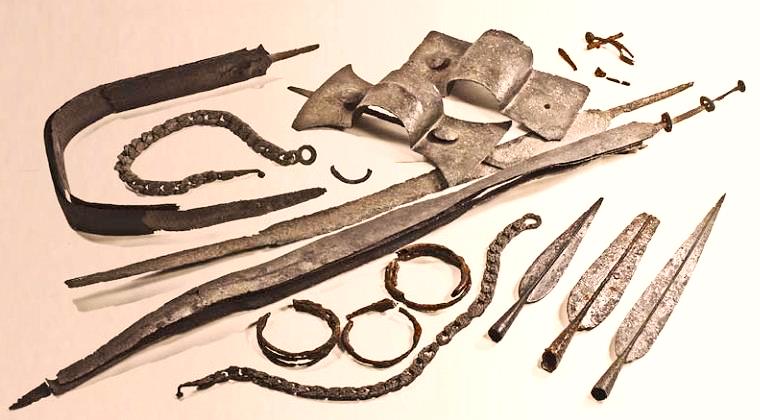 Some of the finest examples of Iron Age metalwork are to be found on the anthropomorphic hilts of swords which appear in the 2nd c. BC, produced by the pan-Celtic tribes across Europe. In late Iron Age artistic compositions human heads become increasingly frequent and realistic, and appear to have had talismanic significance. The hilts of middle to late La Têne swords become truly anthropomorphic, with the figures body as sword grip and the arms and legs as cross bars. 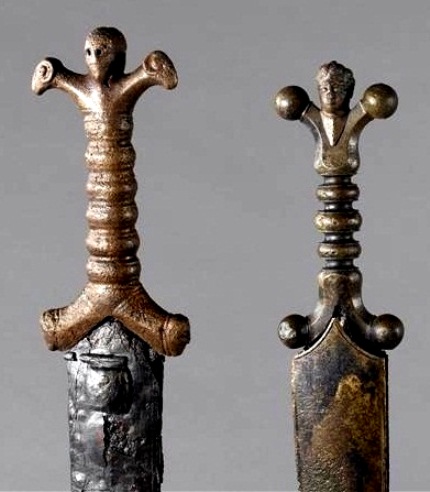 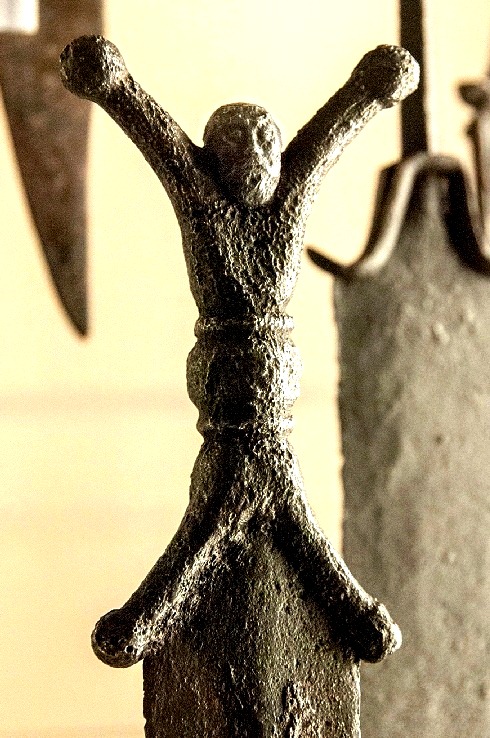 The head of an anthropoid hilt from a Celtic sword, discovered at Besançon, France (2 c. BC)

Such anthropomorphic representations are not confined to swords, but are also to be found on a number of Celtic daggers from this period. The more realistic depiction of the human head in the late La Têne period, possibly under Roman influence, is also to be observed on other artifacts, notably eastern Celtic helmets of the Novo Mesto type.

Short iron sword with X-shaped hilt,  from the Celtic settlement in the Gališ-Lovačka hills, western Ukraine (3/2 c. BC). It is from such X-shaped hilts that the Celtic anthropomorphic hilts are believed to have evolved.

Hilt of a Celtic dagger from Zalaegerszeg, Hungary.
(2nd c. BC)

Celtic swords (and daggers) with anthropomorphic hilts were produced during the La Têne C/D period (2nd c. BC – early 1st c. AD), and have been found across the continent stretching from northwestern Ireland to the Balkans, indicating that they gained popularity among all the pan-Celtic European tribes during this period. 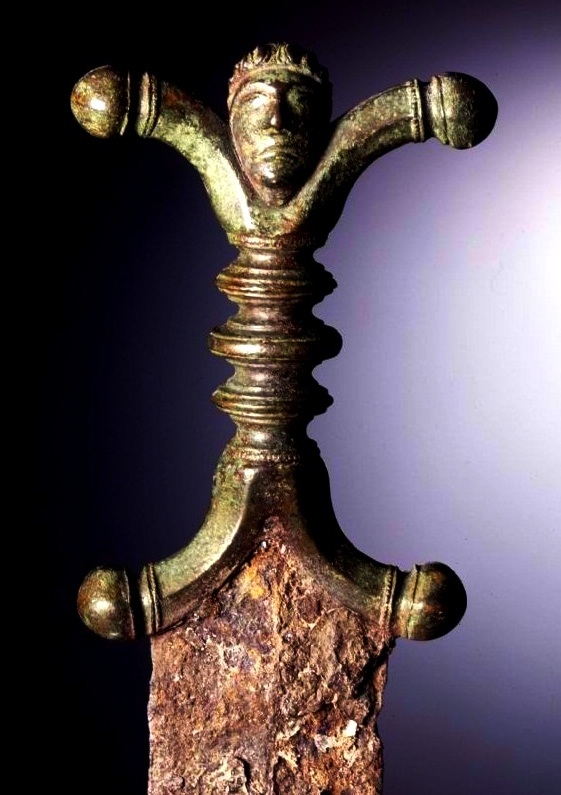 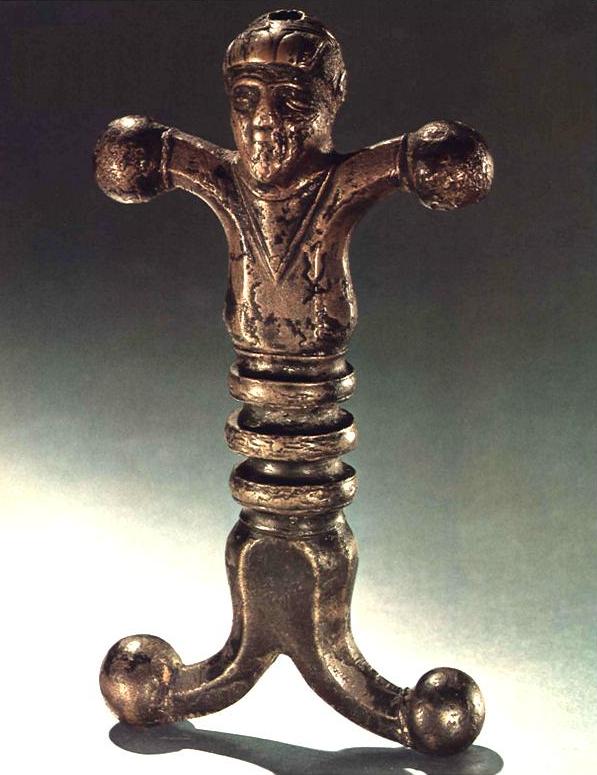 Balkan Celts
Create a free website or blog at WordPress.com.