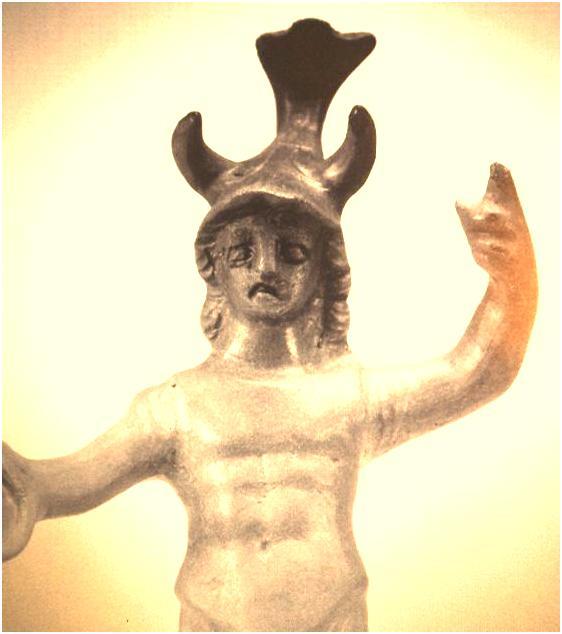 A wealth of Celtic archaeological material, mostly dating to the late La Têne period, has been discovered over the past decades by ‘treasure hunters’ at the Iron Age hillfort at Žerovnišček near Bločice (Notranjska Region) in Slovenia. Perhaps the most fascinating of these artifacts is a bronze statuette of a horned deity which dates to the late La Têne period and, according to archaeologists, depicts the God Mars who also became associated with the Greek God Ares, and was popular in the Celtic world where he was associated with various local deities (Šašel Kos M. (1999) Pre-Roman Divinities of the Eastern Alps and Adriatic. Situla 38).

The libation dish (patera) in the extended right hand is an Italico-Etruscan motif characteristic of donor statuettes between the 3-1st c. BC

Most interesting about the Žerovnišček statuette is the fact that the deity is depicted with a horned helmet, which ancient authors mention were worn by the Celts:

“On their heads they put bronze helmets which have large embossed figures standing out from them and give an appearance of great size to those who wear them; for in some cases horns are attached to the helmet so as to form a single piece, in other cases images of the fore-parts of birds or four footed animals”.

Horned helmets among the Celtic tribes are also well documented in artwork and coins from the period, and archaeological confirmation of the existence of such helmets includes depictions of a warrior on an early La Têne stone slab from Bormio, examples depicted on the Gundestrup cauldron, as well as the horned Waterloo helmet found in the river Thames in London, and another discovered near the village of Bryastovetz  in eastern Bulgaria.

The Bryastovetz Horned Helmet from Eastern Bulgaria (3rd/2nd c. BC)

A statuette of the Goddess Athena / Minerva with a votive inscription from the middle and late La Têne period settlement at Dornach (Aschheim, Munich) also has a helmet with cattle horns. The statuette was found in a late La Têne well or ritual shaft, in a layer dated to between 80 and 50/30 BC. The statuette is stylistically of Late Hellenistic form (Dietz K. (1999) Die Inschrift auf dem sockel der Dornacher Athene. In: Irlinger, Winghart 1999:144-147).

The Žerovnišček statuette, executed in the Italico-Etruscan tradition (Laharnar op cit), with Celtic iconography interwoven, represents a wonderful example of the synthesis of Italico-Etruscan and Celtic artistic/cultural traditions.