The most exotic part of the Roman cavalryman’s panoply was the face helmet, a metal mask that completely encased the head. One example of such is exhibited in the National Museum in Damascus, which is among the finest of Roman artistic achievements. The helmet, from Homs (ancient Emesa/Ἔμεσα) consists of a visor to protect the face and a shell covering the rest of the head, and is made entirely of iron coated with silver except for the crown area, which was originally covered with fabric. This luxury object was probably used for parades, but also intended to be worn in battle, since there is a hinge above the forehead that attaches the visor to the helmet. The helmet is thought to have belonged either to an Arab king of Emesa, or at least someone close to the king, since it was discovered in the city’s royal necropolis, and was probably made in the workshops of Antioch, which were famous for their precious metal products. 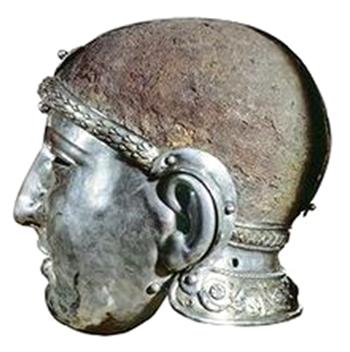 Another such face-mask (below) was discovered  in a rich royal burial dating from the early Roman period at Philippopolis (modern Plovdiv) in 1905. This mask was subsequently published by the Bulgarian archaeologists Boris Dyankovich and Bogdan Filov (see Шлемът-маска в музея при Пловдивската народна библиотека. – Годишник на Нар. Библ. Пловдив І (1925), с.139-150) and exhibited in the city’s Central Library, where it remained on display to the public for decades*.

However, unlike the Syrian example, the Bulgarian mask is sadly no longer available for the scrutiny of the public or academics. Having survived numerous wars and the Communist period, the Plovdiv mask fell victim to the phenomenon which has recently haunted the nation’s archaeological/cultural heritage. In 1993-1994, under mysterious circumstances, the mask disappeared, and its current whereabouts are ‘unknown’.

On the theft of artifacts from Bulgarian Museums and Institutions see also: https://www.academia.edu/4136789/Celtic_Coinage_from_Bulgaria_-_The_Material_Evidence

*The author would like to express his thanks to Dr. Evgeni Paunov for bringing the existence/theft of the Bulgarian mask to his attention

5 thoughts on “A Tale Of Two Masks”